For Europeans well acquainted with their union’s borders and treaties, their similarities and differences, Indigenous North America is not unlike the EU, a continent of many different nations with many diverse people. There are more nations in North America than just the United States or Canada. Indigenous people are not the monolithic mass Hollywood would have you believe. It is important to emphasise that while European colonisation of Indigenous lands has been profoundly disruptive (to say the absolute least) Indigenous national borders still exist and are still recognised by Indigenous citizens across what many call Turtle Island (North America).

Coming from nations with rich storytelling traditions – with cosmologies and knowledge embedded in languages that are not written – Indigenous filmmakers have emerged as a vital force in the renaissance and resurgence of Indigenous cultures. Where the first century of cinema established a negative and simplistic stereotype of a Native person, the twenty-first century has seen the emergence of new generations of Indigenous screen storytellers who are telling exciting, profound, and complex stories never before seen on the screen. In contrast to the stereotypes of the Hollywood Indian (created by non-Indigenous filmmakers), films created by Indigenous artists draw their strength and creativity from a responsibility to their communities and nations, and contribute to the cinematic movement known as Indigenous Narrative Sovereignty, the right for Indigenous people – and Indigenous people alone – to tell their stories on screen.

Indigenous Cinema in North America is fascinatingly diverse, encompassing nations from Hawaii to the Southwest to the Eastern coast. It also encompasses the North American Arctic region, a vast expanse from Alaska in the west to Greenland in the east (yes, Greenland is part of North America and whose people have stronger linguistic and cultural ties to Inuit in Nunavut than to Danes in Denmark). The two short programmes in this collection share stories from First Nations filmmakers from across North America. The first collection focuses on the circumpolar region (Alaska, the Canadian North, and Greenland), a remarkably beautiful part of the world filled with dynamic life, and cultures and communities under threat from climate change. Where the first programme focuses on the north, the second programme takes us south (“The Other 49” referencing the other American states outside of Alaska), to stories from Hawaii to the continental USA.

Both programmes are ultimately a call to action for the viewer to hear new stories, to think differently, and to understand that Indigenous peoples and nations are a rising artistic, political, and cultural force not only in North America, but around the world.

Jason Ryle
The Artistic & Managing Director of imagineNATIVE, an Indigenous-run organisation based in Toronto

Watch the greetings of U.S. Embassy of Finland here. 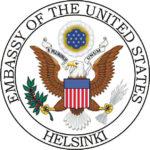